“Reflecting back on my years at Mercy Regional College, I am grateful for the kind, caring and passionate people I was lucky enough to be involved with. They have no doubt helped me pave the way to the next chapter of my life.” 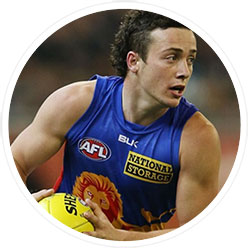 Lewis Taylor
Lewis was identified relatively early as one of the AFL’s top draft prospects, following a stellar junior career which included selection in the AIS-AFL Academy squad and him being named Captain of the VIC Country side in the 2013 U18 National Championships. Drafted in 2014 to the Brisbane Lions Taylor’s resilience and determination paid off as he was crowned the 2014 AFL Rising Star is the closest count ever. He polled 39 votes, one more than the Western Bulldogs’ Marcus Bontempelli, to win the Ron Evans medal.