Life of Service to the Community Pays Off for Peter Conheady

Australia Day 2021 saw local activists recognised for their contribution to the community with Corangamite Shire Citizen of the Year and achievement awards. One of the achievement award recipients was Peter Conheady who attended Catholic Regional College in Years 7-9 (1983-1985).

Peter is a prominent figure in the local community known and respected for his involvement in various organisations and initiatives. Peter’s active participation in social and sporting events started back at the College when he was offered the position as team runner for the Year 9 footy side.

Peter has been an essential member of the Camperdown Football Netball Club since 1989 where he had a range of roles from the club secretary to president. Peter’s service to the community includes committee membership at the Leura Oval Committee of Management, Camperdown Playspace Redevelopment, Hampden Football Netball League and the Hampden League Hall of Fame Committee. Peter is involved in many local events and clubs such as the Camperdown Cup, Camperdown’s Annual Agricultural Show, Terang Country Music Festival, Terang Tornadoes Basketball, Rock the Clock Festival and Corangamite Relay for Life. Among other organisations and projects that Peter has assisted at different times are the Terang & District Racing Club, Mortlake Racing Club, Camperdown RSL Sub Branch, Santa in the Avenue and the Annual Christmas Carols for Advanced, Camperdown.

Peter says, ‘Some commitments are annual, some monthly, others weekly and some a few times a week. I’d like to acknowledge everyone from these community clubs and groups that have been a part of my journey.’

‘I was happy to accept the award on behalf of not only myself but all the other volunteers and friends I have worked alongside over the past 32 years at various events and with many organisations/groups.’

Peter has been involved as a parent with St. Patrick’s Primary school and is a regular contributor in St Patrick’s Parish in Camperdown. Over the years, Peter has generously given a lot of his time to Mercy Regional College as a parent and a good friend of the College. We would like to congratulate Peter on this well-deserved award and thank him for his contribution to the life of the school and the wider community. 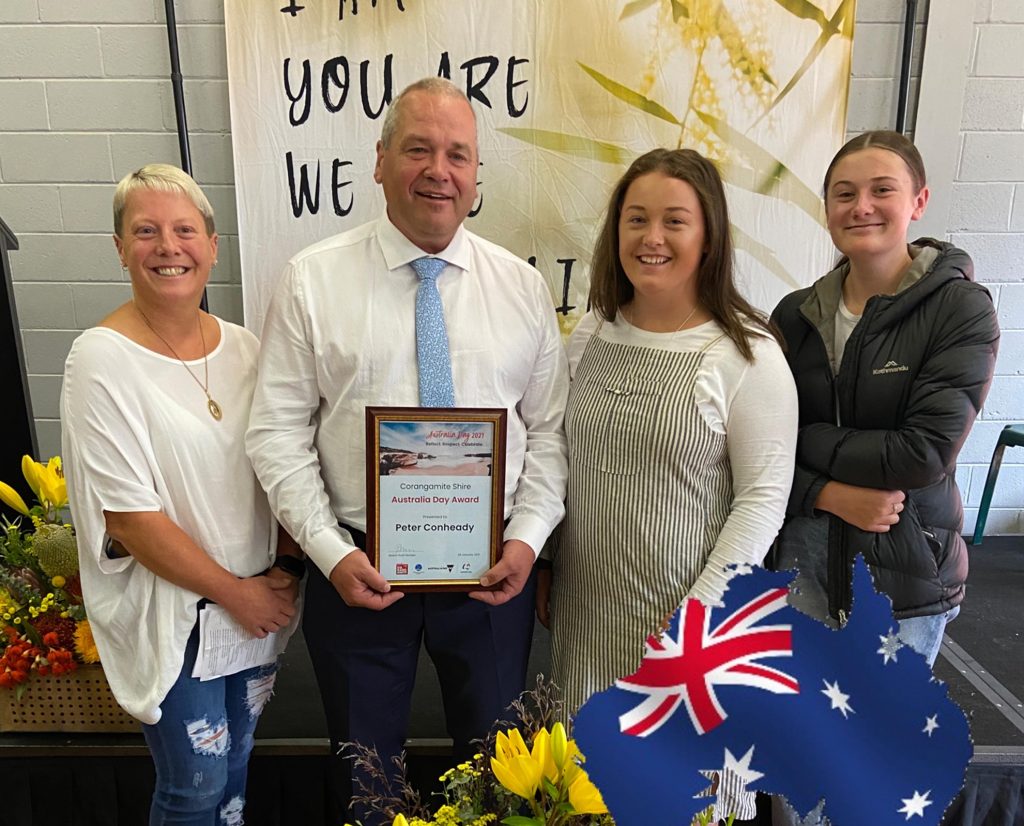 Peter Conheady with family at the Australia Day Awards Ceremony 2021
"Mercy Regional College is committed to holistic education; we are determined to ensure that each student flourishes academically, spiritually, emotionally, socially and physically."
Mercy Regional College